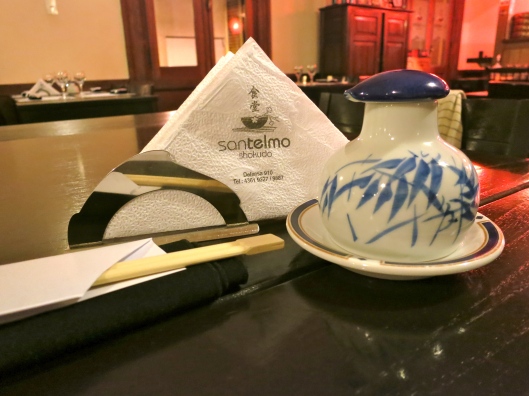 “Cream cheese.” “Queso crema.” “Philadelphia.” Whatever you call it, I’m baffled as to why it seems to be the key ingredient in Argentine sushi. Don’t get me wrong, I love me some cream cheese, and I can enjoy the occasional salmon and cream cheese stuffed sushi roll. But in most sushi restaurants here, globs of it appear everywhere, and it’s just…no.

Thank goodness for Shokudo and Comedor Nikkai, two restaurants owned by Argentina’s Japanese Association that just so happen to be within blocks of our apartment. This sushi’s the real deal. The thick slices of rich, butter-smooth salmon sashimi practically melt in your mouth. And while a dab of cream cheese can be spotted from time to time, they actually complement the salmon rather than overpower it. I can honestly say the sashimi and nigiri are the best I’ve ever had, and considering this town’s reputation for awful sushi, that was an unexpected revelation. 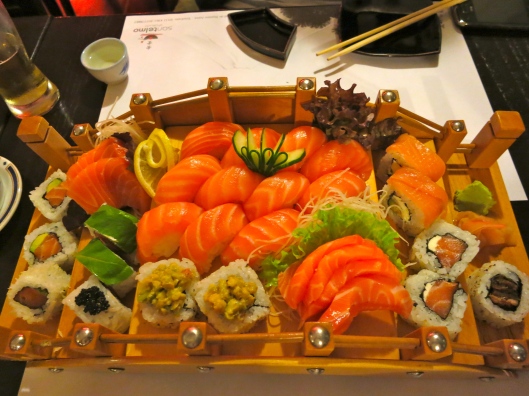 Both restaurants have basically the same menu. Our go-to order is the Osaka de Salmón, a mix of 30 pieces of salmon sashimi, nigiri, and rolls that are left up to the sushi chefs imagination. It comes with a small entrada, a bowl of miso soup, and a cup of green tea at the end of the meal. The restaurants are both dim and not photo-friendly, so unfortunately the pics don’t do the food justice.

Both locations are a bit tucked away. Shokudo is on a second floor, overlooking Defensa, while Comedor Nikkai is inside the Japanese Association building on Independencia and doesn’t even have a sign. But if you hear the loud (and kinda scary) sounds of people practicing martial arts, you’re in the right place.

In the street meat hierarchy, hot dogs ain’t got nothin’ on choris.

One of the first places Gaspar took me when I joined him in Buenos Aires was a tiny hole in the wall on Carlos Calvo between Defensa and Bolivar. The walls were plastered with aging photos and notes from satisfied celebrity and average-joe customers, and the place was full of old men with mullets, missing teeth, wandering eyes and dirty piropos. Perhaps not every woman would appreciate such a charming treat. But the smell of garlicky delicious chorizo sausages sizzling on the parrilla is enough to make anyone go a little loco. The chorizo was butterflied, served up on hunks of crusty bread and slathered with chimichurri. Throw in a litro of cerveza, and it was the date of my dreams.

At the risk of stating the obvious, chorizo + pan = choripan, a popular pork sausage sandwich. This chorizo shouldn’t be confused with its spicy Spanish counterpart. Argentine chorizo, like most local food, is far from spicy. Instead it is flavored with garlic and pimentón (Spanish paprika).

We indulge in this local drunk food regularly, rarely bothering with the drunkenness excuse because we are not ashamed to love it sober. During the Feria de San Telmo, the popular street fair on Defensa featuring block after block of antiques and wares from local artisans, several parking lots are converted into choripan-pushing parrillas. El Rey del Chori is one of my favorites. In addition to choripan, most any chori vendor also offers bondiola (a hunk of pork served on a roll) or vacíopan (a hunk of steak served on a roll), both of which are also quite good. 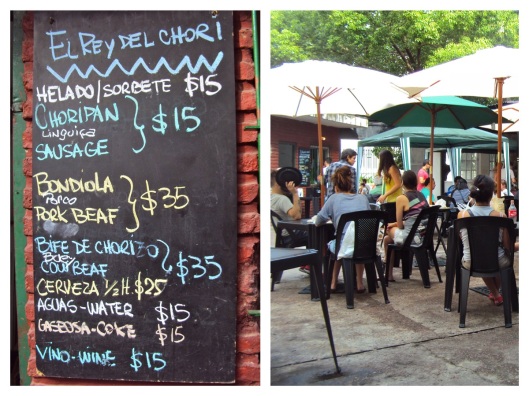 If you’re looking to try out choripan in San Telmo, these are my favorite spots. Just don’t say I didn’t warn you about the potential creepiness of my favorite hole-in-the-wall on Carlos Calvo, mmkay? You may or may not find yourself being smothered in kisses by an intoxicated elderly gentleman sporting a rat tail.

Finally! We passed this restaurant so often on our evening dog walk that the route was officially dubbed The Sagardi Walk. (“Let’s grab the pup and go on The Sagardi Walk!”). We finally decided it was time to stop talking about it, and be about it.

Sagardi is a Spanish restaurant, and the focus is pintxos. These tapas-style snacks offer a seemingly endless variety of options, all on top of small slices of bread and held together by a toothpick; hence the name that literally translates to “thorn” or “spike”. They’re especially popular in the Basque country of Spain.

Sagardi has a dining room for formal, sit-down dinners with a menu full of delicious-sounding entrees, but there’s really no need to go beyond the bar area where the pintxos are lined up along the counters.

At Sagardi, you can choose to sit along the actual bar where the pinxtos are showcased or at a large communal table that offers enough room for different dining parties to be separated and comfortable. You basically serve yourself, grabbing a plate and piling it high with options ranging from thick slices of smoked salmon to wedges of tortilla española. I recommend taking it slow. Hang out for a while. As the evening progresses, piping hot pinxto varieties will be passed around the restaurant by the waitstaff, and you’ll be sorry if you filled up too quickly. Options like grilled squid and shrimp, mini-burgers with caramelized onions, and filet mignon with grilled mushrooms come out of the kitchen in a steady, tempting stream. 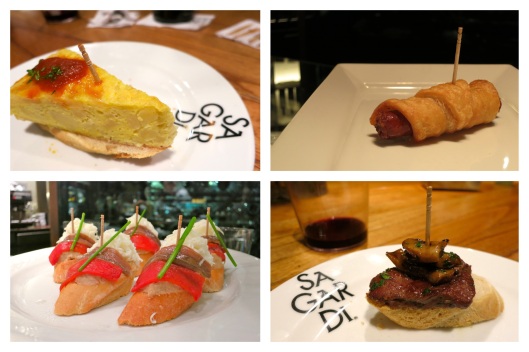 Pintxos are paid for individually at $12 pesos a pop, and your bill is determined by the number of toothpicks you’ve accumulated. Choose wisely!

Check out reviews on TripAdvisor. 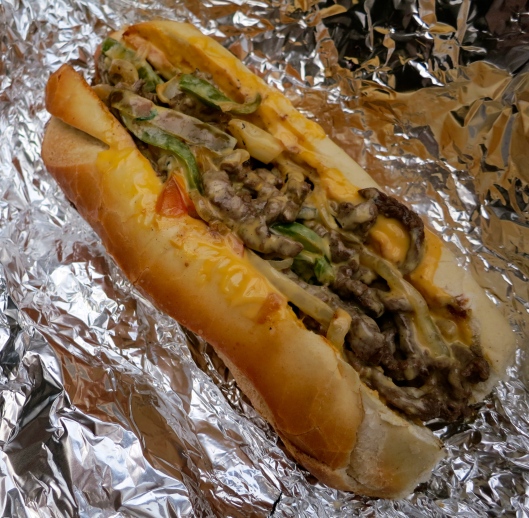 Oh, what a beautiful discovery.

We’d been meaning to try El Banco Rojo for a while, the hole-in-the-wall spot offering comidas para llevar from the owners of dive bar favorite La Puerta Roja in San Telmo. I’d heard they had kebabs and falafel, and despite remarking on the regular that we should check it out, we just hadn’t gotten around to it. But when we strolled by one day and spotted the sign touting not only kebabs and falafel, but Philly Cheesesteaks and BBQ wings, it was a done deal.

We went into it with low expectations. I mean, c’mon. We couldn’t even find decent cheesesteaks when we lived in Miami or Chicago, so how good could it be in Buenos Aires? Hmm, good enough that we’ve been back on a weekly basis for a cheesesteak fix to accompany Gaspar’s viewing of the Eagles doing whatever it is that they do on NFL Game Pass every Sunday. Football in the summer is just a cruel punishment. 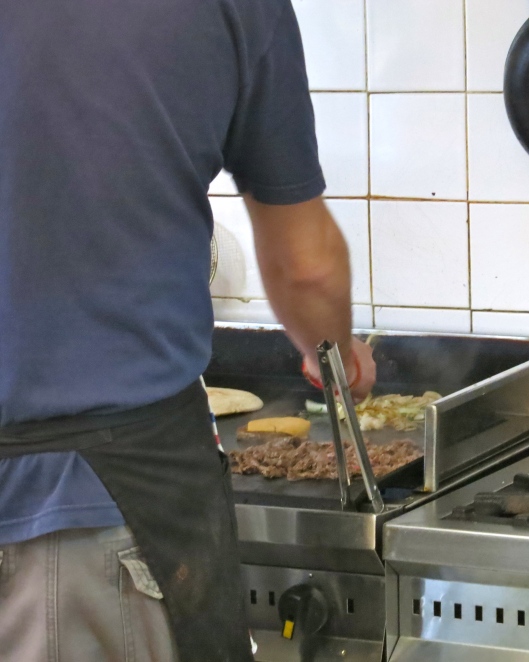 Magic in the making

Okay, okay, so the purists may argue that the peppers are a no-no, but I love them. And unlike a lot of Buenos Aires eateries where fussy eaters are out of luck, El Banco Rojo is willing to make exceptions for someone who may just prefer Whiz Wit’ or Without. The key ingredients are all solid. Good bread, good meat and for the love of God they even have a delicious mysterious Whiz-like cheese! It’s no Jim’s Steaks (which, for the record, kicks both Pat’s and Geno’s asses) but what more could two ex-pats ask for? 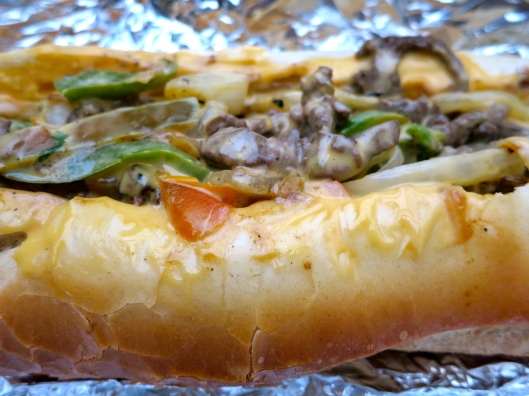 Pizza in Buenos Aires can elicit a variety of responses from foreigners. I personally enjoy it, but have heard some people get downright ANGRY about it. To which I say, tranqui…and go home.

The typical Argentine pizza’s thick, doughy crust, piles of cheese and near absence of sauce is most likely not like the pizza from a visitor’s country of origin. If you’re craving a New York or Chicago-style slice, it’s not going to fill that exact void. But anything that includes piles of cheese is still going to be pretty damn tasty.

My favorite pizza in the city, to date, is from Sr. Telmo. With windows that line Defensa and Pasaje San Lorenzo, the ambience is open and inviting. The building boasts your standard San Telmo vibe of exposed brick everywhere the eye can see, and the walls display local works of art for sale. But the focus is on the pizza. Their pizza has a thin crust (by local standards) with an awesome variety of pizza roja (with sauce) or blanca (without) and toppings like arugula, shrimp, jamón crudo, mushrooms and more. Almost makes you not miss pepperoni. 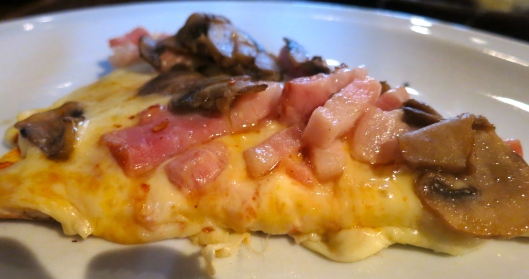 To make it even better, you can order two halves so you can try different flavor combinations. Our favorite is a grande, one half the pizza blanca de cinco quesos oozing with mozzarella, provolone, parmesan, roquefort and goat cheeses. The other half, pizza roja del pasajero with (a bit of) sauce, mozzarella and piled with mushrooms and panceta, the Argentine bacon that’s more like a fatty ham than crispy yanqui-style bacon. 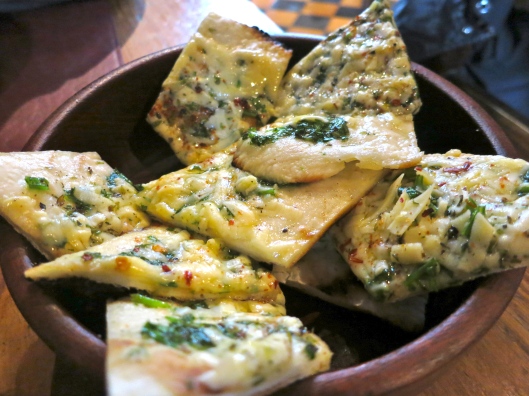 I also love the cheesy garlic bread they give you. Well worth the cubierto charge. I’d come here just for this! And to top it all off (er, wash it all down?) there’s a decent beer selection that rotates (translation: they run out) regularly. But there’s always something new and interesting to try, and what a welcome treat to trade in the litros of Quilmes and Stella for a cold Estrella Galicia or Antares Porter with your slice.

Read the reviews on Guia Oleo.