Holy crap, you guys. It’s a good thing I’m not actually paid to blog on a regular basis, cause I would be fired and/or broker than broke.

More than a month has passed since we crossed into Perú and it’s been sensory overload: so much to see, so much to hear, so much to taste. After a steady diet of un-spiced and under-salted foods in Argentina, it was like an explosion of flavor topped off with lots of pisco sours. In other words: me gustó. MUCHO. 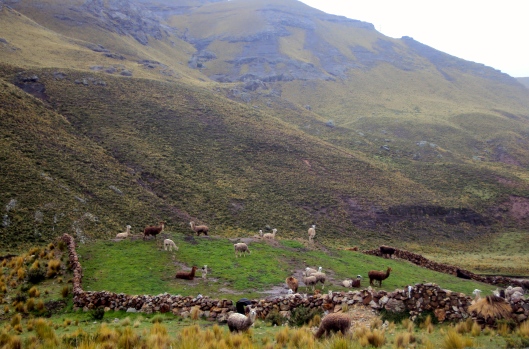 After leaving Chile, we drove through the Andes to Puno, a quaint and very traditional town on the shores of Lake Titicaca, the highest navigable lake in the world. I share this little nugget of information with you not to give you an edge in your next game of Trivial Pursuit (you’re welcome), but so that you can appreciate that going from sea level to 4,000 meters meant a bad case of soroche (altitude sickness). We’re excellent planner-aheaders. It took us a few days to feel human again.

As soon as we could, we visited the famous Uros Islands, floating man-made islands constructed of reeds and inhabited by pre-Incan indigenous groups that maintain a simple, provincial lifestyle. We then began roaming the streets to join in the colorful festivities for the close of the Virgen de la Candeleria festival, watching native dance troupes in traditional garb and spectacular costumes flooding the dusty plazas accompanied by drums and pan pipes, paying homage to Puno’s patron saint.

When our stomachs had forgiven us for the rapid ascent, we ventured into a small corner restaurant specializing in local delicacies with a menu that was prepared daily (on the rare days they were open) and sold til they ran out. We found that our Spanish skills did nothing for us when it came to deciphering the handful of dishes on the menu, so we asked the waitress for her recommendation and crossed our fingers. We were rewarded handsomely. We waged a silent war over the last bites of the savory adobo arequipeño, a spicy pork stew made with plenty of peppers and chicha de jora, a fermented corn beer. Sadly, the photos I took in the dim restaurant with my sub-par camera make the dish look less than appealing, so stock photo it is until I figure out how to duplicate the recipe on my own.

While we’d planned to head to the Sacred Valley, Cusco, and Machu Picchu, a kidnapping warning issued by the U.S. Embassy put a damper on those plans. Driving through remote mountain roads in a foreign car with US plates and a pile of luggage and surfboards on top isn’t exactly helpful if you’d like to keep a low profile. Better safe than…kidnapped? So instead we headed to Arequipa, where we stayed at the delightfully isolated El Lago Estelar hotel and felt sorry for ourselves for a few hours for missing out on one of the wonders of the world. By the time we had dinner, we were over it. The hotel restaurant was stellar. Peruvians love to boast about the breadth of their country’s food “specialties” with good reason. There are so many! Each region has something truly special to offer, and El Lago Estelar did Arequipa proud. To give you an idea of how good, we extended our stay just to keep eating. Not ashamed.

Highlights were the Tacu Tacu, an Afro-Peruvian staple that brings together cooked beans and rice into a soft dough, fried to a crisp and in this case served with a thinly pounded milanesa-style steak, plantains and a fried egg. 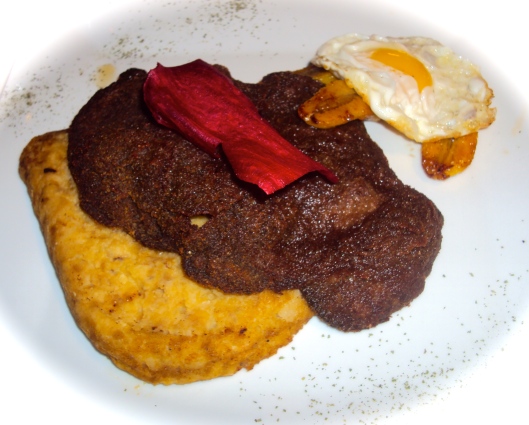 And the rocoto relleno, a spicy red rocoto pepper – not to be confused with a bell pepper lest you want to burn your face off – stuffed with savory spiced beef and served with a gratin of thinly sliced potatoes and cheese. 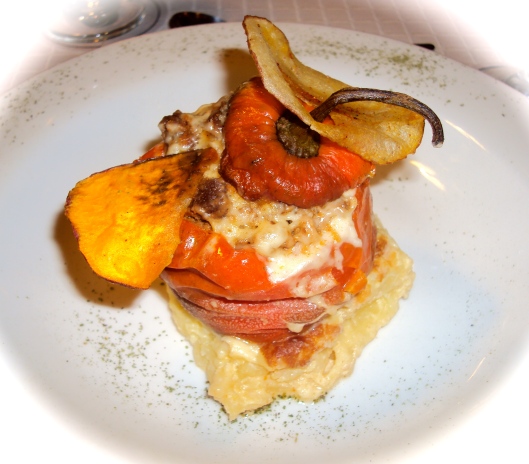 Again I promise you, with better lighting and a half-decent camera, these would look as mouth-wateringly delicious as they tasted. Trust me?

Because I’m so woefully behind and can appreciate the short attention span of the modern blog reader (with the exception of my die-hard fans, a.k.a. my family – hi y’all, love you!) I’ll be sharing highlights from our leisurely trip up the coast of Peru soon. With much improved photos! I find the strength of that coastal sun is good for more than just wrinkle enhancement.