Empanadas are everywhere in Argentina. In Buenos Aires, not a block goes by where you can’t pick up this fast food, and many people make them at home as well. Common fillings including ground beef, chicken, ham and cheese, and tomato and mozzarella.

Empanadas differ all over the country, and most would agree that you can find the best empanadas in the northern provinces like Salta and Tucuman. I concur, and add Mendoza to the list as well. For me, the pastry makes a lot of difference, and I prefer an empanada encased in a crisp, flakey crust.

I became a fan of chorizo empanadas before we moved to Buenos Aires, and haven’t seen a chorizo version here. If you’re noticing a theme, yes, I’m a big fan of chorizo. These don’t take long at all to put together, and do well as part of a tapas style meal. In the States, I made them using ready-made puff pastry and would buy raw Spanish chorizo from Whole Foods. Here in Argentina, I’ll use store-bought empanada pastry and hard chorizo sausages.

This version’s adapted from a cookbook I picked up at World Market called “Spanish: a collection of over 100 essential recipes.” 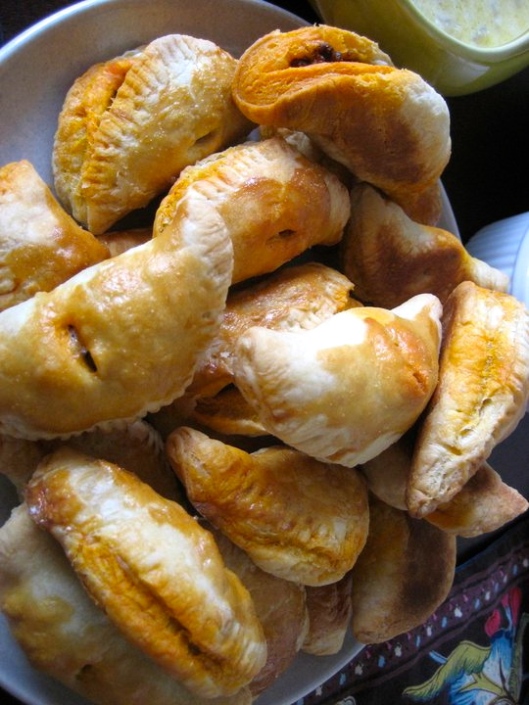 If you’re using raw chorizo sausages, remove the casings and cook the sausage. If you’re using hard, cut the sausage into small dice. On a lightly floured surface, thinly roll out the puff pastry, if using. Cut into circles using a round 3 1/4 inch cookie cutter. Gently pile the trimmings together, roll out again, then cut out additional circles to produce 12 in total. Put a spoonful of the chopped chorizo onto each of the pastry circles. Dampen the edges with a little water, then fold one half over the other half to completely cover the chorizo. Seal the edges together with your fingers. Using the prongs of a fork, press against the edges to give a decorative finish and seal them further. With the tip of a sharp knife, make a small slit in the side of each pastry. Place the pastries onto baking sheets and brush each with a little beaten egg to glaze. Bake at 400 degrees for 10 – 15 minutes, or until golden brown and puffed. Dust the top of each pastry with a little paprika to garnish. Best served warm.